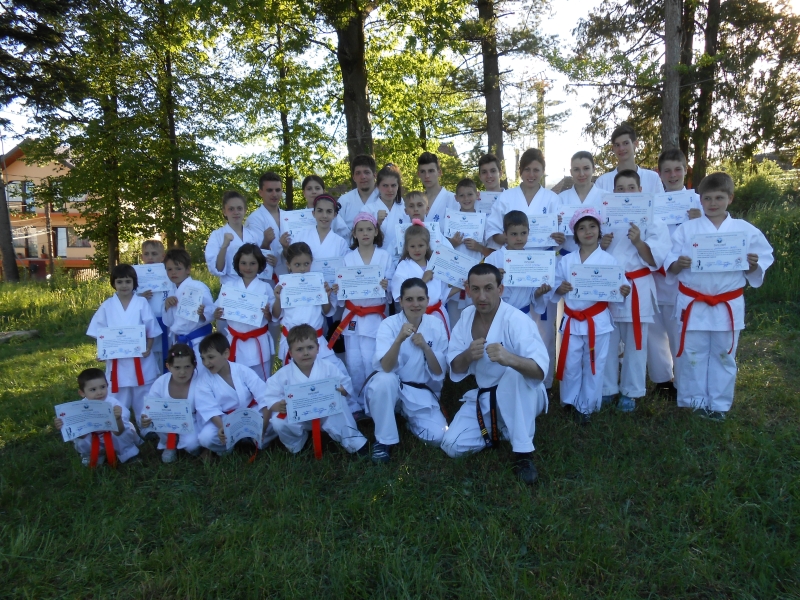 Development of a strong spirit and morale, self-confidence, development of courage, as well as the creation of a connection between the parents and the participants – this is what sensei Ovidiu Baştea had in mind with the training seminar at the Cisnădioara Center of Recreation for the Youth, which took place at the end of the last week. From Friday to Sunday, 30 martial arts practitioners had the chance to improve their fitness, as well as to be entertained, since work teamed up with entertainment.

“The School of Supreme Truth”

This is the actual translation of the Kyokushinkai style, the one taught by sensei Ovidiu (3dan) to his students. It was founded by Masutatsu Oyama and, apart from the fact that it ensures physical, mental and spiritual training, the Kyokushinkai style allows a balance among them and is a way of life. Ovidiu had learnt it, too, and, in his turn, he committed to transmitting it further. Thus, in 2005, he opened the Terrasportika Sports Club, where he is president and instructor, assisted by his wife, sempai Oana Baştea (2kyu). The two, who are currently students at the Faculty of Physical Education and Sports, have begun the project in order to share techniques of the Kyokushinkai martial arts to those eager to learn them. Moreover, they are set to develop strong characters and better trained people, to teach children to be active and to be victors by using fair ways. Therefore, apart from the karate training session, the Cisnădioara seminar also included games and competitions, in order to stimulate the development of the children’s motor skills.

While the first training, on Saturday, was the one of karate, starting with 11 o’clock, the practitioners engaged in games meant to stir their interest and enthusiasm. Although they seem simple at first sight, they were specifically designed to keep the fighters at work, by joining business with pleasure. Thus, strength and speed were the main skills the 30 practitioners had to prove. Children and young men and women were divided in two balanced groups, depending on their weight, so that as many as possible can win. “We do that in order to encourage the child. He/she must feel they won something, in order to be motivated”, the trainer said. Joy and good will governed the training session; this way, among laughter, the competition turned into a game in which the karate colleagues also showed fair-play. And since the purpose of training the fighters for the participation at the Summer International Seminar to take place at the beginning of July was achieved, sensei Ovidiu prepared something new, namely the parents’ involvement in the children’s active life. Thus, the training was attended by everyone: parents, siblings and even grandparents. “The result is extraordinary”, sensei says, particularly that, without the parents’ involvement, the youngest of the practitioners do not seem interested. However, under the parents’ supervision, they’ve proven higher motivation. The friendly circumstances were satisfactory both to the young practitioners and to the parents, in Cristina’s words; Cristina is the mother of the club’s youngest member, Filip: “I’m happy there are people who focus on gathering us and engage us in such activities”. The parents who attended the event also participated in some of the games.

“Karate are not a battle”

This is what Oana Baştea is sharing with us; she believes training helps children be dynamic rather than fight; dynamism is extremely important in each and everyone’s life. And while training games allowed them to enjoy more freedom, kimono training involves another aspect of a sportsman’s life. This happens because, by its very appearance, the karate fighters’ costume requires discipline. The same discipline that led them to effort and, later, to reward; thus, most of them, won were happy when they won medals and, particularly, belts. One of the practitioners at the Terrasportika cluj is Mihai Baştea, Ovidiu and Oana’s son. Given that he was raised in a family of sportsmen, he can now boast, at almost 15 years of age, a black belt. Another equally skilled martial arts practitioner is Ioana Buta, the one who learned her first moves five years ago. Currently a student in the 7th grade, Ioana has participated in various competitions in Sibiu and she has the brown belt, for which she invested a lot of effort. She has been interested in martial arts from the beginning, and now she is content she can defend against any danger. Schoolmates look at her “differently”, she says, because they know that behind that fragile girl’s face there is a well-trained fighter. Anastasia is equally confident in her success; aged only 5 years and a half, she already has the orange belt. “She left the ballet classes and she opted for karate. She won the orange belt and she was very proud”, Anastasia’s mother recalls it proudly. Filip keeps up with them; he is the youngest practitioner at the club. Almost five years old, he has already taken his first exam. This time in kimono, the training Seminar continued on Sunday too.